Posted on 10 July 2012 by jews4big | Comments Off on JAILED PALESTINIAN FOOTBALLER FREED, CAMPAIGN CONTINUES FOR OTHERS DETAINED
Now that Mahmoud Sarsak is free, please keep up the pressure on UEFA to remove the honour from Israel of hosting the 2013 Under-21 Championships by sharing the Red Card Israeli Apartheid petition with friends and colleagues on Facebook, Twitter and email: #MahmoudSarsak #Palhunger #BDS
See below for the campaign news release 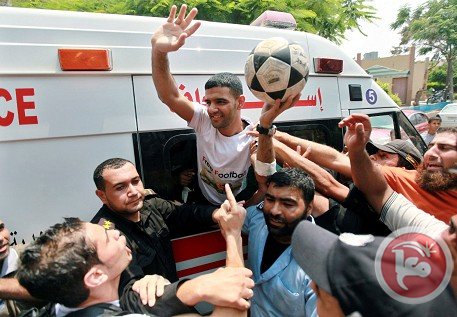 Red Card Israeli Apartheid campaign
http://redcardapartheid.weebly.com/
10 July 2012
JAILED PALESTINIAN FOOTBALLER FREED, CAMPAIGN CONTINUES FOR OTHERS DETAINED
·      Footballer released after three month hunger strike
·      Israel’s detention process condemned as unlawful
·      UEFA urged to move 2013 under-21 finals from Israel
Tuesday July 10 – Campaigners welcomed news of the release of Palestinian footballer Mahmoud Sarsak after three years in an Israeli jail, but vowed to continue working for an end to the system of detention under which he and hundreds of others have been detained without charge or trial.
Twenty-five year old Sarsak lost a third of his body weight during a three month hunger strike in protest at his incarceration since July 2009 under Israel’s ‘Unlawful Combatants Law’, which is illegal under international law.
The Israeli authorities agreed on June 18 that his detention should end following an international outcry. Footballing legend Eric Cantona and French international star Frederic Kanoute , FIFA President  Sepp Blatter and the international federation of professional footballers FIFPro  joined forces with filmmaker Ken Loach, Archbishop Desmond Tutu, author Alice Walker and many others demanding an end to his unjust detention.
Relatives gathered at the Palestinian side of the Israeli Erez crossing in northern Gaza on Tuesday to welcome the freed prisoner who was then transferred to Shifa hospital in Gaza City for medical attention. “I thank God and all the athletes of the world,” Sarsak told Reuters between sips from a bottle of water.
FIFPro, the international federation of professional footballers, welcomed Sarsak’s release but made clear that no other Palestinian footballers should have to go through what he had experienced. ‘We, FIFPro, refer to the fact that all professional footballers in the world must have equal rights, including the right to freedom of movement, which is a universal right of every citizen. That also applies to all professional footballers in and from Palestine.’ said FIFPro secretary general Theo van Seggelen.
While Sarsak was still on hunger strike in June the president of the Palestinian Football Association, Jabril Rajoub, wrote to UEFA president Michel Platini reminding him that Olympic squad goalkeeper Omar Abu Rois and Ramallah player Mohammed Nimr are also being held by Israel without charge.
“For athletes in Palestine, there is no real freedom of movement and the risks of being detained or even killed are always looming before their eyes,” Rajoub said.
He said the Israeli government was in “direct violation of FIFA regulations and the International Olympic charter” and said: “we ask Your Excellency to not give Israel the honour to host the next UEFA Under-21 Championship 2013.”
Rajoub’s request reiterated a plea sent to Platini a year earlier by 42 Palestinian football clubs based in Gaza, the besieged Palestinian territory close to the Egyptian border which is home to many of Palestine’s best players. Platini ignored the appeal from the clubs and rejected Rajoub’s.
“We cannot understand why UEFA ignores the other footballers still detained byIsrael and the racism and human rights abuses that have a daily impact on every area of Palestinian life, including sport,” said Geoffrey Lee, coordinator of the Red Card Israeli Apartheid campaign. “Israel does not deserve to host next year’s 2013 European Under-21 championship and we urge everyone who cares about fairness in sport to sign our petition calling on Platini to move the competition to another country.”

Film maker Ken Loach, who endorsed last year’s Palestinian call for Israel to be stripped of hosting the 2013 under 21s and has backed the campaign petition, said the international pressure that had won Sarsak his freedom now needed to be applied in support of “all the other Palestinians detained illegally in Israeli prisons.”

1. Reports, including pictures of Sarsak’s release, from Ma’an News agency
and Reuters
2. Report outlining the illegality under international law of Israel’s ‘Unlawful Combatants Law’
3. Background information from human rights groups about Palestinian political prisoners
4. Full text of Palestine Football Association president Jibril Rajoub’s letter to Michel Platini is contained within this report:
5. Platini rejects Rajoub’s appeal, confirms Israel will host U-21 2013:
http://www.winnipegfreepress.com/sports/soccer/uefa-confirms-israel-as-host-of-2013-european-under-21-tournament-despite-palestinian-pressure-159487005.html
6. Red Card Israeli Apartheid petition and letter outlining the case against Israel’s hosting UEFA’s  2013 Under-21 finals.
7. French professional footballers including Kanoute, Anelka and Diaby call for Sarsak’s release “in the name of sporting solidarity, justice and human rights”
8.  FIFA President Joseph S. Blatter’s statement, 12 June:http://www.fifa.com/aboutfifa/organisation/footballgovernance/news/newsid=1648346/
9. Eric Cantona, Ken Loach, Noam Chomsky, Desmond Tutu, Alice Walker and others insist on Israeli racism and human rights abuses facing the same sanctions as Poland or Ukraine: ‘It is time to end Israel’s impunity and to insist on the same standards of equality, justice and respect for international law that we demand of other states.’
Full text and signatory list of June 12 letter.
10. June 2011 letter to UEFA president Platini from 42 Palestinian football clubs calling for the U 21 Finals not to take place in Israel: “The use of overwhelming force in Operation Cast Lead in winter 2008-09 was responsible for leveling large swathes of Gaza including the Rafah National Stadium, and killing football players Ayman Alkurd, Shadi Sbakhe and Wajeh Moshate, as well as over 1,400 other Gazans. Israel’s Apartheid Wall, ruled illegal by the International Court of Justice in 2004, runs its eight- meter-high solid concrete course less than 100 meters away from the Faisal Al Husseini Stadium in Al-Ram, the current national stadium of Palestine.”
11. Report summarising Red Card Israeli Apartheid campaign:
– ISRAEL’S RACISM OFF THE HOOK AS UEFA SNUBS PALESTINIANS –
12. Reports of racism entrenched in Israeli society, including football:
– Israel’s interior minister Eli Yishai denounces black victims of mob violence as “infiltrators” and says refugees should be imprisoned, “all of them without exception.”
http://www.guardian.co.uk/world/2012/may/31/israeli-minister-racial-tensions-infiltrators
– Racist football fans on the rampage attack Palestinians in a shopping mall
http://www.guardian.co.uk/football/2012/mar/23/israeli-football-fans-attack-palestinian-shoppers
13. Examples of Israeli authorities interfering in Palestinian involvement in international football matches (various sources):
– July 2011 Palestinian players were prevented from entering the West Bank fromJordan after an away game in Thailand. Mohammed Samara and right back Majed Abusidu therefore missed the return game at home 5 days later.
– In 2010 the football league winners of Gaza and West Bank had to postpone their cup final because the Gazan team was refused permission to travel.
– Also in 2010, Israel refused to allow six members of the Palestinian national team to  travel from Gaza to Jordan for a match against Mauritania. Captain Ahmed Keshkesh was preventing from returning home for several months.  http://www.the-afc.com/en/news-centre/member-association-news/234-palestine/30489-we-will-carry-on-our-struggle-rajoub
– In May 2008 the national team was not able to attend the AFC Challenge Cup, denying them qualification for the 2011 Asia Cup.
– In April 2006, Israeli missiles destroyed Gaza’s only football stadium.
– Palestine reached the top of their group in the qualifying rounds for the 2006 World Cup. They failed to qualify after the Israeli authorities refused permission for five key players to travel to a crucial Asian zone match against Uzbekistan in Qatar onSeptember 7, 2005.  “Every day they come to the border only to be sent back,” said Tayseer Barakat, director for international affairs at the Palestine Football Association. “Every time our players want to travel outside for training or playing, the Israeli authorities are blocking them.”
14. At least two of four U21 Championship venues are on or adjacent to land seized from Palestinians.
a) Bloomfield – before Israeli forces occupied Jaffa in 1948, the ground was known as Basa (swamp) Stadium, home to local Jaffa team Shabab el-Arab. They were expelled and later formed Shabab el-Nassera in Nazareth. In January 1949 the Basa stadium was given to the Hapoel Tel Aviv team by the Israeli “custodian of absentee property”.
b) Teddy Stadium, named after former Jerusalem mayor Teddy Kollek, is beside an almost entirely destroyed village, al-Maliha.
c) Reserve stadium at Ramat Gan was built on land seized under the Absentee Property Owners Law of 1950 from the Palestinian villages of Jarisha and al-Jammasin al-Sharqi.
15. Palestinian child footballers, victims of Israeli military actions.
– 20 June 2012. 12 year-old Mamoun Hassouna killed by while playing football in theGaza strip:
http://electronicintifada.net/content/remembering-mamoun-killed-israeli-missile-he-played-football/11434
– April 2005: While playing football: Ashraf Samir Ahmad Mussa and Khaled Fuad Shaker Ghanam, both 15, and 16-year-old Hassan Ahmad Khalil Abu Zeid, were shot dead by Israeli soldiers
– October 2004: Jihad Hassan Barhoum, 16, was shot in the abdomen by Israeli troops in October 2004. A seven-year old was hit in the back.
– 2001: Khalil al-Mughrabi, 11, was hit in the head by a burst of gunfire. Two friends, aged 10 and 12, were wounded.
Source for above three items: http://www.guardian.co.uk/commentisfree/2007/mar/26/iacknowledgealexsteinsplea
And
http://www.rememberthesechildren.org/

Comments Off on JAILED PALESTINIAN FOOTBALLER FREED, CAMPAIGN CONTINUES FOR OTHERS DETAINED