So commented one audience member who joined a packed and lively post-performance discussion on Friday evening with more than a dozen members of the ASHTAR theatre company and British theatre professionals and enthusiasts.

Also on the panel were UK writer and broadcaster Bidisha and Sonja Linden, founder of iceandfire theatre . There is a full audio recording of the discussion here.  Ashtar’s Richard II is on film here.

Based in Ramallah in the Occupied West Bank, Ashtar was formed in 1991 by two prominent Palestinian actors and directors, Iman Aoun and Edward Muallem, both of whom were on stage in Richard II at the Globe on May 4 and 5.

Their Gaza Monologues, created in 2010 and performed by more than 60 companies in 36 countries, was their artistic response to the Israeli assault on Gaza which killed almost 1,400 Palestinians in Dec/Jan 2008/09. It told the personal stories of a group of children from Gaza. The Israeli Ministry of Foreign Affairs tried to stop its performance in Norway.

At the beginning of Friday’s discussion, Aoun, Muallem and 11 other cast members introduced themselves, each drawing warm applause from the audience as they revealed the richness and complexity of their lives as Palestinian artists living and working all over Palestine and the diaspora.

Many are established figures in Palestinian society as directors, playwrights, film-makers, theatre group founders and artistic directors, and educators. 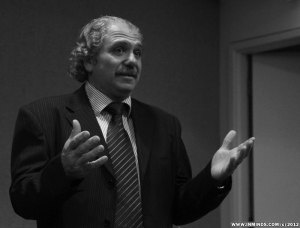 Amer Khalil, Bagot in Richard II, works in theatre with young people in Gaza and the West Bank.

Ashtar’s artistic director Aoun said that in interpreting a Shakespeare play outside their usual repertoire, they had to work hard to understand the setting for Richard II, to explore its meaning at the human level, and to consider what it meant to them.

“With help from our Irish director Connall Morrison we eventually made our starting point the end of the play, where Henry Bolingbroke (Henry IV of England) says he will go to Jerusalem to clean his hands of the blood he had shed – and to dirty our land!,” said Aoun.

“Britain occupied Ireland as it later occupied Palestine. But the play speaks far beyond our situation. Shakespeare talks about every tyrant, every power struggle in every place and time.”

At the Globe’s reception for Ashtar, after their second performance of Richard II on Saturday May 5, Globe artistic director Dominic Dromgoole hailed Ashtar’s interpretation of a play which the English habitually did not “get”.

“It took a Palestinian company to show us what it’s really about,” he said.

The discussion on Friday, held in a lecture theatre at the Globe but organised independently by Ashtar with help from London-based campaigners for Palestinian rights, repeatedly highlighted Ashtar’s role as artists performing universal work.

“When Palestinian artists perform, they are not only representing their lives under military occupation,” said Bidisha, noting that resistance may take political, diplomatic or cultural forms.

She said the play’s bloody action gave us claustrophobic character studies reminiscent of a rich Saudi family scheming and fighting for wealth and power.

Linden, whose own work explores stories that are often passed over or ignored, said artists have a duty to engage and bear witness. She called theatre “a form of non-violent resistance.”

The audience  included a number of actors, directors and playwrights who had signed a letter calling on the Globe to rescind its invitation to the Israeli National Theatre, Habima, in the Shakespeare festival.

The Habima issue was one of those raised in audience questions.

Aoun stated unequivocally that all the theatre companies represented by Ashtar’s members support the Palestinian call for boycott, divestment and sanctions (BDS), and specifically cultural boycott.

“We cannot agree to any hostile presence on the West Bank, or engage with anyone complicit in it,” she said. “Remember we have to LIVE the Occupation. Even coming here, to perform  at the Globe, I was strip searched at Tel Aviv airport.” 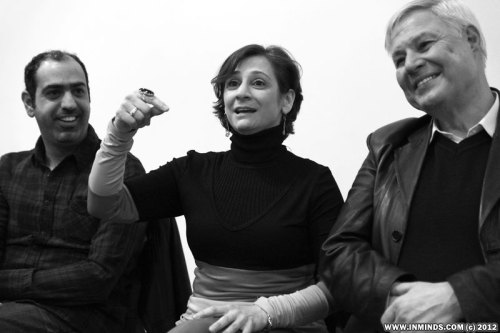 Nicola Zreineh, who played Richard II’s deposer Bolingbroke in the play, said the boycott was not just about Habima.

“Any institution of the Israeli state should be cut off as long as justice is denied,” he said.

George Ibrahim, sharing the platform with Aoun and Zreineh, reminded the audience;  “We Palestinians are all besieged. Even in Jerusalem the cruel, ugly wall separates us.”

Another Ashtar member, Firas Farah, joked that checkpoints and closures made it easier to get from Jerusalem to London than to Ramallah.

“When Henry Bolingbroke says he is going to Jerusalem, I think – ‘How will he get a permit?’” said Farah.

In an interview with journalist Eleanor Kilroy before coming to London, Aoun addressed the idea that cultural boycott prevents communication between artists on different sides of a conflict. She agreed that art can build bridges and bring people together,  but she appealed for “a bit of sanity.”

“At night Israeli artists want to perform with us and in the morning they serve in the army. What is the use of going on producing art when deep down they know they are breaking basic human rights by supporting the occupation and its apartheid regime and settlements? Israelis need to work inside their own society; changes have to occur on the ground in Israel for there to be real justice.”

Other members of the Ashtar team were pictured at the discussion by Abbas from inminds. 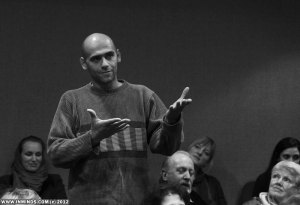 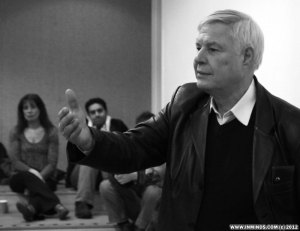 See here for an excellent resume by Eleanor Kilroy of the arguments for Habima’s exclusion from the Globe’s festival.

Bidisha is launching her new book, Beyond the Wall: Writing a Path Through Palestine, on Wednesday May 16.

Some examples of media coverage for Ashtar: