The last few months have seen the British establishment waging an hysterical witch hunt against Jeremy Corbyn’s Labour leadership and the pro-Palestinian movement. Their weapon of choice has been the charge that antisemitism – and support for terrorism – are rife on the Left, that Labour “has a problem with Jews,” that Jewish LP members are  frequently subjected to racist abuse and that the new Labour leadership has allowed intolerant Jew-haters to flood into the party.

The response from Corbyn’s team has been defensive and apologetic. They rightly assert their own anti-racist credentials, insist that antisemitism is a vile prejudice that is not permitted in the Labour Party and pledge to expel anyone found guilty of it. So far so good. But they have not hit back at the pro-Zionist lobby – Jewish and non-Jewish – which deliberately and maliciously seeks to associate Jew-hatred with criticism of Israel in the public mind. This feeble approach has to change.

J-BIG stalwart Tony Greenstein, Brighton-based socialist, anti-racist and anti-Zionist, has won an apology (they call it a “clarification”) from the Daily Telegraph for “implying” that he was an antisemite. Labour’s Compliance Unit has suspended him from membership without giving any reason, but apparently shared the information with the Telegraph. Tony explores the charges against him on his blog.

Jewish pro-Palestinian groups in London are currently working on a strategy to help stem the tide. Both at grass roots level and within the Labour hierarchy, there is a huge need for political education to communicate the following key points.

Genuine antisemitism exists and must be condemned, as we would any form of racism.

Zionists have worked so hard to damn any criticism of Israel as antisemitic, it’s tempting to reject such charges out of hand. But amidst the crazed pillorying of Corbyn’s team in the Mail Online, for example, there are some instances of actual expressions of racism against Jews by Labour supporters. These must be tackled with as much vigour as hatred of Blacks, migrants or Muslims – so comprehensively ignored by the pro-Israel lobby.

When the complainant is committed Zionist Louise Ellman MP, one can sympathise with Piers Corbyn (brother of Jeremy) who reportedly tweeted: “#Zionists cant cope with any-one supporting rights for #Palestine.” Never a truer word! But it gave ammunition for the Evening Standard to use in publicising charges from Labour’s conflicted candidate for Mayor of London, Sadiq Khan. From a Muslim family, with a record of supporting causes such as the campaign to release Shaker Amer from detention in Guantanamo, and having been supported by Corbyn and leftwing former Mayor Ken Livingstone in his campaign for the candidacy, Khan now says he wears “a badge of shame” about antisemitism in the party and the leadership needs to be “trained on what antisemitism is.” 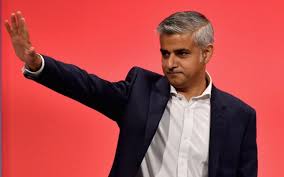 Sadiq Khan, Labour’s candidate in next month’s vote for Mayor of London, has publicly taken the side of pro-Israel Tories in alleging antisemitism in Corbyn’s Labour Party.

The Palestine solidarity movement has learned to its cost that it must be vigilant against antisemitism among its members. In a recent story in Haaretz about a defender of Holocaust deniers who has been  rejected by her local Labour Party, the paper referred to her as “the former secretary of the Camden branch of the Palestine Solidarity Campaign.” Haaretz neglected to say that the person in question was dismissed from that position precisely because her views were incompatible with PSC’s anti-racist ethos.

Charges of antisemitism are very often designed to protect Israel from criticism, harm legitimate campaigns for Palestinian rights, especially Boycott, Divestment and Sanctions (BDS), and undermine Jeremy Corbyn and the Labour Party under his leadership

Jonathan Arkush of the Board of Deputies (BoD) of British Jews has been vocal in accusing Corbyn of tolerating antisemitism, referring to “a stream of clear cut cases of antisemitism in the Labour party, which can’t just be fobbed off as differences over Israel.”

The stream is actually more of a trickle of cases, many referring to events in the distant past and many being far from clear cut. Most cases have attitudes to Israel and Zionism at their heart.

The Mail Online piece mixes some apparently nasty instances of genuine antisemitism with the staging in York of Caryl Churchill’s play Seven Jewish Children (“horrifically anti-Israel” according to the BoD), a Facebook post complaining that ‘leading Zionists’ were trying to take over a student Union and links with the website of Friends of Al-Aqsa – a respected part of the Boycott, Divestment and Sanctions movement.

The increasingly high-profile, non-violent BDS campaign is a major priority for antisemitic branding by those determined to defend Israel. Jonathan Neumann of the so-called Jewish Human Rights Watch, writing in the Daily Telegraph in February, alleged that BDS is just a precursor to ISIS-style beheadings: “The anti-Semitic campaign to shun Israeli goods embodies the radicalism that threatens everyone .”

Then there is the oft-quoted example of the Oxford University Labour Club where co-chairman Alex Chalmers, who is not Jewish, resigned in February claiming that a ‘large proportion’ of the party’s undergraduate members have ‘some kind of problem with Jews’.

The most comprehensive statement of the club’s “problem with Jews” appeared after Chalmers resignation on the Twitter feed of the Oxford Jewish Society (JSoc). 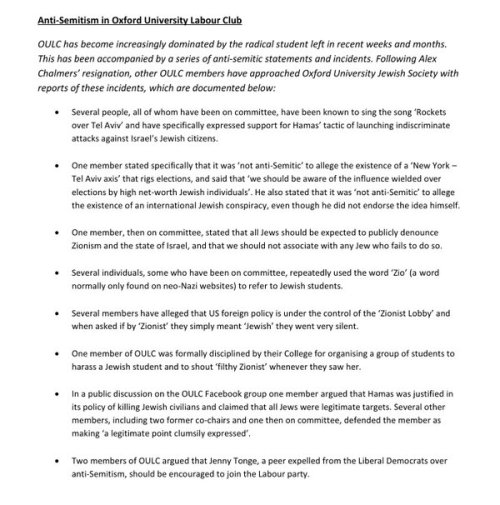 If the statement is true, it does indicate there may have been some questionable behaviour and some ham-fisted attempts by pro-Palestine supporters to explain what they thought was, or was not, antisemitic. But the JSoc clearly doesn’t know what antisemitism is either, claiming that the word ‘Zio’ – frequently tossed around between Jewish anti-Zionist activists – belongs on neo-nazi websites and that Jenny Tonge – kicked off the Liberal Democrat front bench for expressing understanding for Palestinian militants – was expelled for antisemitism. This is a circular argument in which people conflating antisemitism with anti-Zionism denounce supporters of Palestine for having been previously denounced for antisemitism! It all goes back to Arkush’s “differences over Israel”.

There is substantial opposition among Jews to this cynical campaign.

Jews are not an undifferentiated mass of pro-Israel supporters, nor have they ever been. Today they are certainly not united behind the witch-hunt again the pro-Palestinian Labour Left and the BDS movement.

Clear evidence for this appeared on the Guardian letters page after  Jonathan Freedland published a long piece retelling the story of a British Left riddled with anti-Jewish racism.

Leading Jewish pro-Palestine campaigners queued up to refute his allegations.

As one said: “…it is a betrayal of every Jew in history who fought for human rights and against oppression, and every Jew ever persecuted for being a Jew, to sling allegations of antisemitism every time anyone tries to stand up for Palestinian rights.”

Zionist beliefs are not the preserve of Jews alone.

There is a whole other story to tell about the origins of the Jewish Zionist movement in the second half of the 19th century, the attachment of many leading Christian intellectuals and politicians to the idea of Zionism and the relationship of both to antisemitism.

Today’s most vocal British Zionists include Justice Secretary Michael Gove, Secretary of State for Communities and Local Government Eric Pickles and Business Secretary Sajid Javid. Not a Jew among them.

In the USA the most ardent supporters of Israel are to be found not among the Democrat-voting Jews of the East Coast but among the millions of evangelical Christians in the South who believe all Jews must gather in Zion to usher in the Second Coming of Christ.

See elsewhere on this website for a briefing about Zionism and Antisemitism.

There is treasure trove of valuable background information on the website of Jews for Justice for Palestinians.